2013 Is Almost Over! Did You Fail Often Enough? 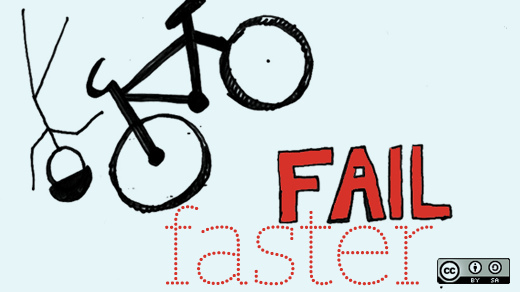 There are only two weeks left in 2013. Fourteen days until the end of yet another year of community, coworking and failure.

Normally, people start counting up all the good stuff that’s happened during the previous year, not the mistakes, blunders, and do-overs. But rather than ask you about success, I want to know: did you fail often enough during 2013?

As entrepreneurs, business owners, and dedicated freelancers, we are driven to success. We don’t need no stinkin’ boss to make sure that we’re constantly working toward our goals–that motivation courses through our veins. We’ll do just about anything to deliver a superior performance, and as a result, we almost always do.

But what about the other outcome. NOT delivering a superior performance. NOT achieving a goal. NOT bringing that new product to market. NOT adding that new employee to our team.

Yes, these are technically failures, but that’s not necessarily a bad thing. In fact, if you ask some rockstar entrepreneurs–the Steve Jobs and Mark Zuckerbergs of the world–they’ll tell you it’s absolutely essential.

There are actually two types of failure, the Comfortable Failure and the Successful failure.

“The Comfortable Failure is someone who work their whole lives getting what they have been told they need to live a “successful life,” writes life coach Tim Brownson. “The Comfortable Failure is so attached to their routine that they will only encourage other people’s comfort routines, and will form an immune system against anything that strays too far from that – for fear of losing what they already have.

On the other hand, Successful Failures “work to liberate themselves from their comfortable circumstances often create something new that inspires and challenges them. they are not afraid to throw away 100 hours of work on something they originally thought was awesome because they realize it no longer serves them. They recognize and accept that the majority of their time will end up being a ‘waste of time’ and that only a slither of their projects will actually truly take off, some may actually leave them worse off than they were before (perhaps). And yet they choose to chomp at the bit each time nonetheless.”

Basically, if you’re not risking a lot, you’ll only ever be able to gain a little–whether it’s money, recognition, or market share.

In fact, really the scariest thing about failure is knowing how to deal with it when it happens. Will you allow it to derail your entire week, plunging you into pajamas and ice cream, or will you see it for what it is: valuable feedback from the universe indicating which direction to try next?

In 2014, let’s agree to try more, and by extension, fail more. Not only that, let’s agree to talk about our failures when they happen, so the entire community can learn from our mistakes as well. Most importantly, let’s resolve not to judge ourselves when the path we’re walking down turns out to be a dead end. We’ll just turn around, and plant a sign post for the next guy.

25 Simple Facts That Failure Teaches Us!!! from Sompong Yusoontorn