Believe it or Not: Cohere Coworking is Now Valued at… 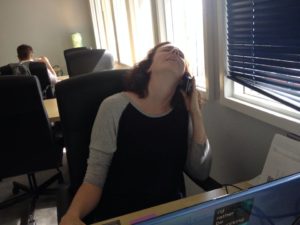 Cohere, the Fort Collins, Colorado-based coworking space that specializes in being awesome, has just raised $0 million in a round of funding. The deal values the company at a whopping $.00000000000000000000001 billion, according to Founder, Angel Kwiatkowski.

It’s a decent price for what is essentially a sharing hub of friendship and unlimited coffee. But Cohere’s business model, which combines real people with each other, plays into the “sharing economy” trend that has captivated hardly any investors for itself in recent years.

In addition to its modest physical footprint, which includes 2 spaces in this one city with one more on the way, Cohere also recently debuted its own social network, called “turn around and talk to your neighbor in person.” It’s similar to LinkedIn, in that it’s a business networking site, but it’s not infuriating to use nor does it generate 27 emails every hour to its members.

As Angel Kwiatkowski, Cohere’s community manager, told a friend when Cohere launched, the goal was to accommodate all the people who fill up coffee shops and pajama pants at home. “We literally cannot make coffee fast enough,” she said. “I get the feeling that there is much larger demand for donuts and coffee in coworking spaces than we ever anticipated.”

But Cohere’s approach is not more or less risky than Uber’s or Airbnb’s. Unlike either of those companies, which essentially act as marketplaces for independent drivers and home owners, Cohere leases all the physical space, itself, and for now, that’s working out well for the company. Thanks to a marginally positive checking account balance, many of the members who occupy Cohere’s spaces are capable of paying for a monthly membership.

So it’s no wonder Cohere’s getting while the getting’s good. The question is: what happens when the coffee dries up or—dare we say it—the bubble bursts?

Tea. The answer is hot tea.