We’re planning our 2nd Annual Chili Cookoff for June 13th. Have you perfected your recipe?

For most people, participating in any extra-curricular work function is just pure torture. Moans and groans can be heard around the world when a notice of the office Christmas party or the company softball league sign-up sheets appear on the break room announcement board.

But, it’s totally different in a coworking community.

You’re not forced to be there, working with people you have nothing in common with. In fact, a coworking community is so much more fun and supportive than the traditional workforce option, that you actually don’t mind hanging out for some friendly competition. So, when an email about the 1st Annual “Chili Makes It Hotter Cohere Cook-Off” went around, there were not moans and groans, but exuberant cheers of excitement to hang out, drink some beer, and eat some damn hot chili together.

As the resident food blogger and city restaurant critic, I was asked to sit on the judging panel along side two other lovely coworkers –Skippy and Heidi. I’m not one to turn down a beer or chili, so of course I was game! 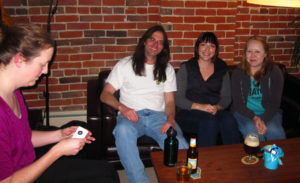 This competition was hardcore serious, which totally caught me off guard. I really didn’t have any expectations going into it, other than eating. When I showed up, there was a great chili display in the conference room, complete with a powerpoint slide presentation of the judges, rules and competitors. Not only that, there were various ribbons, an android figure, and the grand prize of a chili pepper-covered apron to compete for. It was awesome!

Here was the line-up of competitors:

With the hopeful interns fetching the judges Dixie cups of chili to taste, and a crowd full of coworkers intensely watching each critical bite – the competition was on!

Kevin’s “Go Cluck Yourself” chili was mild and balanced. It was a great every day chili, and true to Kevin’s tastebuds – loaded with Udy amounts of salt (you should see him salt his meals while coworking. I’m getting him a salt lick for his birthday). 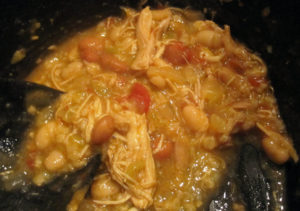 Ashok’s “Kiss My Indian Ash” chili was super chunky and full of spices – most predominant was the cinnamon. It had a sneaky spice to it where it walloped you in the palate like an Indian ninja. We had no idea what was coming until we were being assaulted. 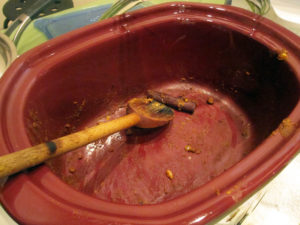 What was left of Ash's Chili-a lone cinnamon stick. We think someone ate the other one.

Nick’s “Holy Sith Thawts Hawt” chili melted my face off. I’ve never had hotter chili in my life, and I eat some pretty hot food for my job. After the first bite, all of the judges became flushed with runny noses. Then, we were practically writhing around on the floor from the pain. My eyeliner was running as tears streamed down my cherry red cheeks. It was aptly described as “black heat.” Evil. Pure evil. 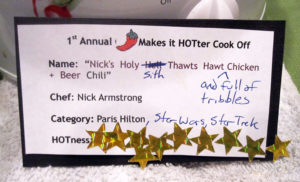 Jessica’s “Hopefully Not Spectacularly Boring” vegetarian chili was a sweet, sweet reprieve. It was spotted with colorful chunky vegetables swimming in a healing mellow broth. It was runny like soup, and in fact, a bit on the boring side, but you can’t blame her for The Joy Of Cookings’ recipe and their neglect to using spices. 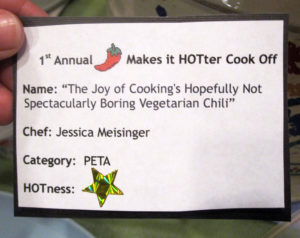 Lindsay’s “Chile Verde” was flat out amazing. Sweet and savory all at the same time, with a slow melding of fresh green chili, tender shredded pork shoulder and ribbons of fat – delightful, sinful pork fat. The freshness of the chili accompanied by fresh tortillas was fantastic. It was almost as if she bribed the judges with tasty masa dollar bills.

Dann’s “Scoville’s Delight” chili was misleading. It should have been called “Divine Swine” or something. It wasn’t hot as he intended it to be, but good LAWD! It was loaded with super-sized chunks of delicious pork, that you hardly noticed the chili. I wasn’t sorry that this lovely farm animal wasn’t saved with a weaved title of “Some Pig,” because it really was a delectable addition to the mild chili base that it wallowed in. 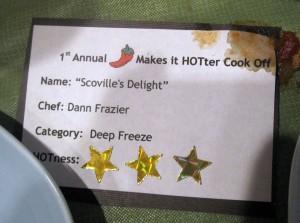 After a brief deliberation, the judges awarded the competitors with their ribbons, Android figurines, aprons and such:

It was definitely a successful 1st Annual Coworking Chili Cook-Off, with many looking forward to the next competition. I think we’re all pretty thankful that our coworkers have some killer cooking skills in the kitchen. Although, if Nick makes his “death paste” chili again, I might have to hope a health insurance agent starts coworking at Cohere. I’ll need more life insurance.