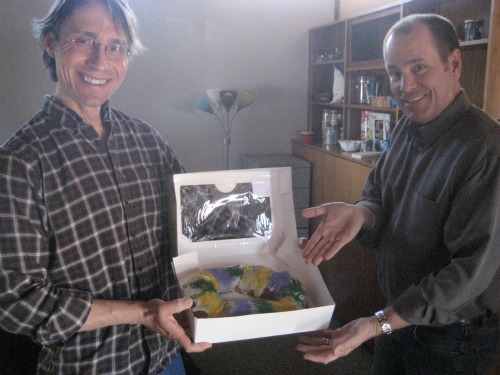 Today is Fat Tuesday, and those who were lucky enough to be at Cohere today were treated to some Mardi Gras treats!

Member Jennifer Davey brought in a King Cake–crazy sweet danish thing that people in New Orleans eat to celebrate Fat Tuesday–so that everyone could have their dose of sugar for the day. Here’s a little background in case you’ve never heard of this tradition:

“The King Cake tradition came to New Orleans with the first French settlers and has stayed ever since. Like the rest of Mardi Gras during those early days, the king cake was a part of the family’s celebration, and really didn’t take on a public role until after the Civil War. In 1870, the Twelfth Night Revelers held their ball, with a large king cake as the main attraction. Instead of choosing a sacred king to be sacrificed, the TNR used the bean in the cake to choose the queen of the ball. This tradition has carried on to this day, although the TNR now use a wooden replica of a large king cake. The ladies of the court pull open little drawers in the cake’s lower layer which contain the silver and gold beans. Silver means you’re on the court; gold is for the queen. 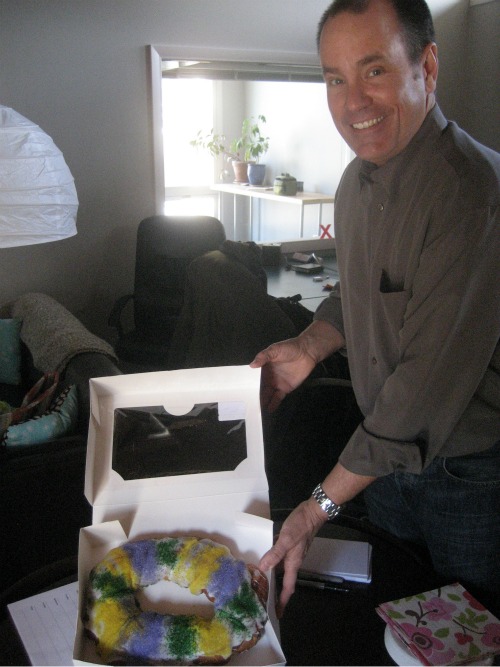 “”With the TNR making a big deal over the king cake in the society circles, others in the city started having king cake parties. These parties particularly among children, became very popular and have also continued to today. The focus of today’s king cake party for kids has shifted more to the school classroom than the home, however. Up through the 1950s, neighborhoods would have parties. One family would start the ball rolling after Twelfth Night, and they’d continue on weekends through Carnival. Whoever got the baby (the coin or bean had changed to a ceramic or porcelain baby about an inch long by then) in the king cake was to hold the next party.”

Be sure to stop by Cohere this week to find out who earned the privilege of supplying next year’s King Cake!