The Cohere Coworking Community is a verbal group. We enjoy a good conversation about words. Let’s discuss one.

Synergy might be the most overused word right now behind the recently revived “D*****bag.”  I get annoyed with the word synergy because people use it for everything.  “I’m going to synergize my workout by adding weights.”  “Let’s get some synergy going at lunch today.”  “That D-bag totally ruined the synergy we talked about.”  None of these phrases makes any sense. 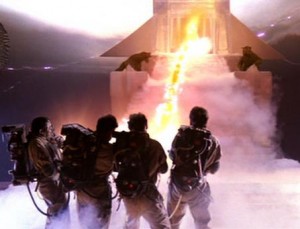 Screw the dictionary.com and wikipedia definitions and let’s get back to an example that we can relate to.  The best use of synergy is when the ghostbusters cross the streams of their proton packs to destroy Gozer.  Initially, the ghostbusters thought that crossing streams would be detrimental.  Similarly, many business people shy away from joining networking groups where other people in their same profession are members.  This is lame and a totally unrealistic and unproductive way to approach business.  Don’t avoid crossing streams with people in the same field as you.  Who knows, if you cross streams with similar people, you’ll be able to destroy a demon from a parallel universe.  Don’t discount the magic that can happen through co-opetition.

The intersection of ideas and passion between like minded people is where the true synergy happens.  Synergy: working with others to achieve more together than you could alone.

Please give some critical thought to the word synergy and let’s clean it up a bit so that it can get its meaning back.