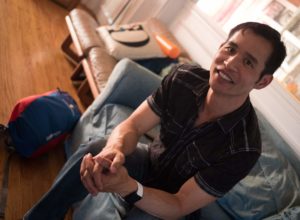 Felix lost his neck in Missouri.

A dozen or so people a year get Shemer’s Neck, a condition unique to ultra-distance cycling. It involves the complete failure of all the postural muscles of the neck, making it impossible to keep your head upright. Especially on a bike.

The timing wasn’t the greatest. He was riding his bike from Oregon to Virginia in the second annual Trans Am Bike Race and rode the last thousand miles or so that way.

“That was problematic because I couldn’t see the road, I couldn’t turn my head around,” he recalls. “Eventually I had to raise my aero bars from horizontal to vertical just so I could be resting my hands on top of the aero bars like a cruiser bike. And that way I was able to sit up enough that I could make out the road in front of me enough to continue on, but that introduced a whole host of other problems.”

He rode the last 24 hours straight with his right hand on top of the aero bars and his left hand propping up his head. “That was about the only way I could see the road safely.”

Citing concerns about personal safety, he took a cab five miles to his hotel after riding his bike 4,200 miles. The journey took him just under 24 days. 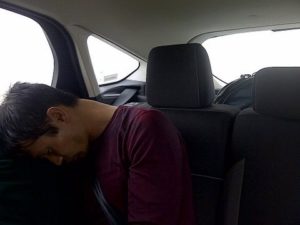 So what’s this guy’s back story, anyway?

Felix, a California native, studied Mechanical Engineering at Stanford, lived in Silicon Valley for 12 years and moved to Fort Collins in 2005. Like Becca, he had set up a spreadsheet of different prospective cities to move to and settled on Fort Collins.

“I had actually been researching close to three dozen places in the U.S. and a few places in Canada over a period of four years. And when I decided to pull the trigger and move somewhere else from Silicon Valley then I went to visit all of them and ultimately picked fort Collins.”

Felix does mechanical design for sheet and machine metal products as well as finite element analysis, which is a numerical method to optimize parts for either strength or weight and to predict failure.

What’s something you’ve been involved with from conceptualization to fruition that you thought was really cool?

“I designed, for an amusement park in California,* one of the first automatic ticketing machines. So basically, like an ATM machine for tickets. This was about 15 or 16 years ago and that was actually kind of a new thing back then….

“That’s something I designed from scratch for a startup company in California that I don’t think is around anymore.”

How did you stumble across Cohere?

Felix learned about Cohere from a former coworking member and joined last August. Coffee shops weren’t working out for him due to noise and bandwidth.

“This was before I went off to Spain and I had a number of deadlines that I had to meet before going there and I wanted to be as efficient and productive as possible with a minimal amount of distractions.” Cat, refrigerator, workout equipment.

What’s an unusual talent that you have?

“I am extremely talented in sleeping. I can sleep in any position or almost any situation, for example, … during races such as the Trans Am Bike Race or the Tour Divide I’ve slept in basically the weeds or behind guard rails or under picnic tables. It’s never been a problem.”

This fascinates me. I’ve had insomnia for as long as I can remember and a drippy faucet, a radiator or simple brain chemistry can keep me awake for hours.

“My greatest passion of my life has been ultra-distance cycling. I think a couple things I’m the proudest of is one, being one of the original eight finishers of a bike race called the Tour Divide which is considered the granddaddy of all ultra-distance self-supported bicycle races in the world. It’s a race that goes from Banff in Alberta Canada all the way down to the Mexico border with New Mexico. The year I did 2008 was the inaugural year … it was documented by a movie called Ride the Divide.”

Eight of seventeen people who began that race finished, Felix in sixth.

Felix also has a lifetime goal of running a marathon in every state. He has 17 to go.

So my self-esteem just took a slight dip. 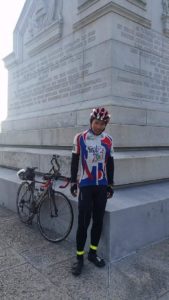 What is your favorite walkable restaurant?

Second to the people, Felix says his favorite thing about Cohere is the location.

“I like that it’s down in Old Town … plus it is walkable to a lot of different restaurants in town. I also have other meetings nearby. For example, every Tuesday morning including this morning I have a French meetup where I get together with people having conversations in French. Or Monday evenings I have a Spanish conversation meetup which actually some Coherians come to.”

Felix is also studying Mandarin and can order food in Portuguese.

What kind of music are you in to?

“I’ve been really into music from this Spanish artist named Pablo Alborán. I found him on Spotify and just went into a big Spanish music phase after being in Spain for six weeks late last year.”

What makes a good Coherian?

“Someone who brings in pastries every now and then. (laughs)

“Someone who brings in a positive vibe, a positive energy and just makes the workplace more pleasant.”

Or drop in for the free coworking day during Fort Collins Startup Week.

John Garvey is a Cohere member, business journalist and marketing copywriter. You can see his work on his crappy beta website here. Stay posted for John’s GoFundMe campaign to buy a bottle of 30-year Macallan. I won’t let ya have any, but I’ll sure be grateful!