This week in our coworking member profile we regrettably interview T. Guy. Ugh, we can’t even. 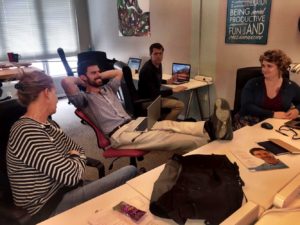 You know that coworker you think of as “That Guy?” He’s a living monument to bad smartphone etiquette. He’s the coworker who always brings up politics at lunch. He encroaches on other people’s desk space. He walks through coworking areas talking on speakerphone.

Guess what I found out?

That Guy is a real person named T. Guy Roth (“Guy”) who works in a coworking space in Fort Collins, Colorado.

T. Guy Roth’s origins aren’t known, although he has somehow managed to work for practically every Fortune 500 company with offices in New York, Chicago, Kansas City, Denver and Atlanta. He’s got a strong but indistinct accent that everyone tries to pin on everyone else. New Yorkers say he sounds like he’s from Boston. Bostonians think he talks like he’s from Chicago. Chicagoans think he’s from New York. Nobody wants to claim the son-of-a-bitch. Why?

“God, I remember his first day here he made this disgusting joke about pederasts,” recalls Dan G., a copywriter who worked with Guy on a one-off branding project several years back. “I won’t get any more specific than that, but I was like ‘I have three kids you prick.’ And he was so filled with unjustified confidence that he actually thought I meant it as a term of endearment.”

I managed to track down another ex-coworker, Cherise M., who remembers working with Guy at a marketing agency in Kansas City.

“When he found out I was in a relationship with another woman, it like galvanized him to try extra hard to get a date with me.” Her upper lip still curls a little when she talks about him.

“I mean, it was a Friday afternoon ritual,” she recalls, “‘Hey Cherise, we should get drinks this weekend at that hipster wine dive in the Crossroads district. Hey Cherise, want to get dinner with me Saturday, somewhere low-key?’ And he’d wink. I had to talk to HR to get him off my ass.” 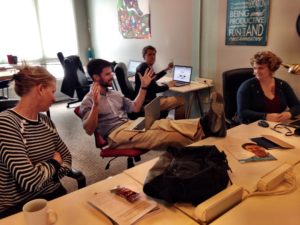 Leaving the competition in the dust at the mansplaining national championships.

Guy works for United Airlines, who proudly upholds him as “the embodiment of our company culture.” He’s been there nearly three years and he’s so well-regarded by upper management (according to him) that they allow him to work remotely.

I managed to catch Guy the other day for a quick interview. (He tried to get me to sign an NDA after the fact and I refused.) Here are a few insights into what makes him tick:

What do you do professionally?

“I design customer feedback surveys and run pay per click campaigns for United Airlines. When we get surveys back I delete all the negative ones and promote the positive ones on every available channel.”

What’s your favorite thing about your job and what’s something you would just as soon do without?

“My favorite thing about my job is having an expense account with very little oversight. It’s amazing the lengths we at United Airlines go to not to refund tickets and minor fees, considering I can run up a $400 tab at a strip club on a weeknight and nobody will bat an eye.

“My least favorite thing about my job is listening to people’s sob stories. I’m always like, ‘Hey man, I didn’t break your guitar and you probably suck anyway!’ or ‘It’s not like I killed your dog,’ or‘Hey man, sorry they double-billed you on baggage fees. Here’s where you can go to submit a refund request,’ and then I point at my ass.

“Actually, come to think of it, I kinda like everything about my job.” 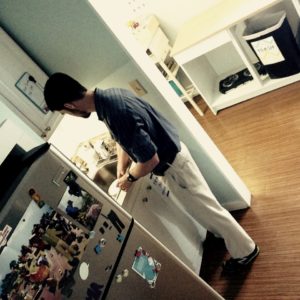 Busted: Guy leaving his dishes in the sink for someone else to wash.

Yeah, so I hate to be placed in this position, but several people you work with urged me to talk to you about turning down your smartphone alerts, your headphones, the general volume of your voice/personality. … I mean, I don’t have a stake in this, but—

“You know, if people are going to be touchy, that’s their problem. I love death metal and there’s only one volume to listen to death metal at and it’s loud as hell.”

Okay, but you realize your noise-canceling headphones still let off a lot of noise. All I’m saying is—

Um, I hear there was an office fundraiser and your coworkers were going to bribe you to bring more odor-neutral lunches to work. Is that true?

“Yeah, I guess so, but there’s no substitute for microwaved fish. You just gotta live and let live.”

I don’t think that’s the intent of the expression “Live and let live.”

Don’t get stuck working with That Guy. Schedule a tour or snag a free day pass with us!

…Unless you’re that guy.

John Garvey is a Cohere member, marketing copywriter, storyteller and writing coach. Read his blog The Garvington Post for business communication and writing tips (and the occasional rant).