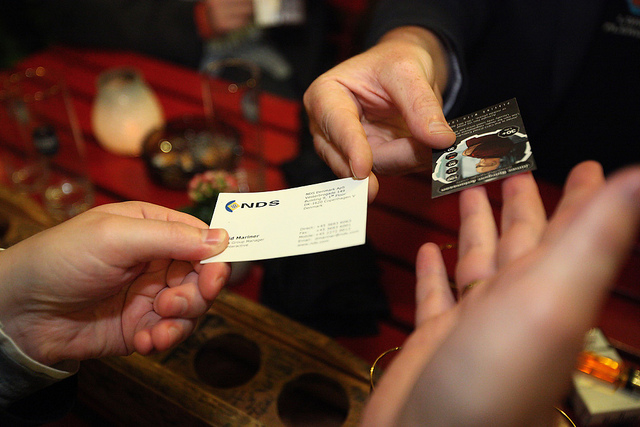 I’ve attended my fair share of networking events in the last year, and I just want to go on the record as saying:

Most networking events are a waste of my time and yours.

Here are a few examples of why those events are falling short.

I got an email alerting me to a new “networking” function today. Out of sheer morbid curiosity, I went to the website to see what it was all about. One of the activities listed on an agenda was to draw names out of a hat to get a lunch date. Now, keep in mind that this is purportedly a group of professionals who want to get to know one another better. The last time I had to pick a team out of a hat, I was in 4th grade. This activity totally devalues the most important part of the coffee meeting: the 2 people in it! I’d much rather have one meaningful conversation with someone I care about or WANT to care about than five quicky-converations.

QUICK FIX: Look for events that don’t have an agenda but rather a simple theme. For instance, in our Business of Freelance/Pancake Eating mornings, we share a meal together and answer a question that I prepare in advance (in my car, on my way to breakfast). Last month we shared what inspires us. That’s it…no names in hats. Our group grew from 4 pancake eaters to 14 in just a few months. And with no gimmicks.

I once went to a networking function called “integrity networking.” As Cohere member Skippy would later point out, “you should probably avoid groups that claim to be ethical right in their title—if they have to overtly say they are ethical, then they probably aren’t.” At the event, everyone had their chance to give an elevator speech, an activity that makes me want to turn to liquid and slide through the floorboards. After I sat through elevator speech Round 2 (in the same meeting), I was handed an application and asked to pay more than a hundred dollars for the privilege of hanging out with Fort Collins’ finest integritarians. Yikes. I’d much rather find authenticity and integrity on a person-by-person basis than go to an event (falsely) promoting integrity.

QUICK FIX: Don’t pay a dime for a networking group. Your money is better spent bringing a 6-pack of beer to our monthly NoCoFat meetup (combined with Articulate City this week!). We keep Cohere open late, member Kevin brings his laptop speakers, and we drink beer, eat chips and talk. Just talk. No funny stuff. There’s no fee to get in, no application and no exchanging of meaningless business cards.

What’s been your experience with networking events? Which ones do you love?